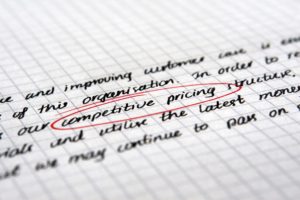 The Apprentice candidates need to work on their pricing strategy

Everyone who knows me, knows I am a huge fan of The Apprentice. I’ve never missed an episode and have watched them all at least twice. It isn’t just for the entertainment value – there are valuable business lesson to learn from each episode.

This year it’s bound to be the same, so each week I will be discussing the key mistakes and take home lessons from The Apprentice episodes.

The task last night was simple – sell a number of goods to trade and direct to customers. Lord Sugar couldn’t have made the task any easier this year; he clearly stated there were some valuable goods within the ‘antique’ products.

The winners would be the team that made the most money.

The Apprentice Week One Results

The task may have been simple, but the execution was anything but. Firstly, the girl’s team, Nebula, immediately sold things for whatever price they were offered before they had even unloaded all the goods at the car boot sale. This was a big mistake. Most early buyers at these events are traders and know the value of products and will offer a knockdown price to make a profit later on.

Nebula’s trade team made a good start by getting some products properly valued, but then ignored the advice of the expert and went to a different location.

To make matters worse, on the way to trade area, they decided to take a detour but forgot to tell the driver of the van with the goods in, so they ended up at a dealer’s without their products.

The boy’s team, Titans, held on to their products until they got the price they wanted. It was a smart move that saw them sell a statue worth £7 for £175.

Their trade team, however, was less successful. While quickly getting their products valued, they moved onto trade sales but then wasted a lot of time trying to sell goods to someone who did not have the authority or money to buy them.

The Titans’ car boot sub-team sold enough to beat Nebula’s combined total. And the result was very clear when the amount Titans’ trade team made was added.

So what can we learn?

Titans seemed to have a very sound pricing strategy. They looked at what price they thought they could sell the product for and stuck to it. Even Karen Brady commented that they refused sales if the price wasn’t good enough.

Nebula was different. They took what price they could get straight away. As Lord Sugar put it, it was a ‘fire sale’ from the start for Nebula – every penny made was a win, and they forgot the pounds.

A clear indication of this was when a member of Nebula sold a pair of vases worth £300 for £15. Pricing is a hard thing to get right, but it is important to know the value of your products and services.

Listen to others Expertise

Another key winning point was the use of expertise both teams employed. Nebula’s trade team ignored the advice of their antiques expert by going to Camden instead of Portobello Road.

It wasn’t a fleeting remark either. The expert told them the best location at least three or four times. However, on a ‘gut feeling,’ the trade team headed to Camden as the expert didn’t tell them ‘not to go to Camden.’

As one expert on the after-show pointed out, Portobello was the best choice because it is the biggest antique market in the UK, if not Europe or the World.

This reminds us to listen to others expertise; we can always learn from the experience of others.

What Nebula didn’t fail on, the Titans certainly did. Their trade team spent an hour talking to one trader in a shop, negotiated a good deal and then discovered he hadn’t the authority or money.

This is a common mistake of salespeople. They get too excited about making a sale that they forget to talk to the decision maker. Yet there is no-one else a salesperson should be negotiating with.

When you are selling, and especially when you are on a tight schedule, you need to qualify leads. Three questions that should always be answered with a yes are:

If they can’t answer yes to all three, then you are wasting your time and need to move onto the next prospect.

The same goes for all forms of selling; email marketing included. Why send an email to info@ or sales@ addresses? These messages are normally read by administrators or people without authority. When they are read by the decision makers, normally they are small businesses with tight budgets – so ensure you have a product to match.

It was a good start for The Apprentice 2016. We are looking forward to next week when the candidates have to design an advertising campaign for jeans. Sounds interesting.

Did you watch The Apprentice? What were your thoughts?