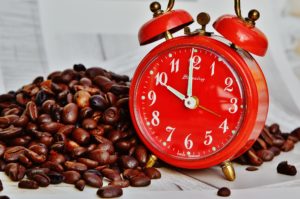 A coffee shop run on timings

I was watching the news the other day when I was introduced to a new café business model. The coffee house in question doesn’t charge for food, drink or even wi-fi, which is all unlimited. Instead, they clock you in and clock you out, and then charge you a flat rate for the time you’ve spent in the restaurant at 6p per minute.

The business owners also allow other food to be eaten in the café.

The business model has been successful in Liverpool and Manchester. Mainly because of cheaper rents. The owner of one café stated that in London, it was possible to do, but they would have to charge £15 an hour roughly.

The cafes’ model is obviously unique and it made me think –  how do we determine price, especially when the expenditure isn’t so predictable?

Not All People Eat The Same

One example is that some people will go in and eat as much as is humanly possible. If they did it in half an hour, their total charge would be as little as £1.80. However, others would only drink a single cup of coffee, which would be more aligned to the usual charge for a coffee. But if you had a cake as well – then how would the company be able to turn a profit?

At the moment, the company does make a profit and attracts more than 10,000 customers every month.

Yet they must have to be careful with costs; only producing enough food and drink to satisfy their customers and keep staffing levels to a minimum. This might mean that food and drink also becomes more of a self-service than full-service. But that shouldn’t be an issue.

As the living wage is set at £9.20, you can start to see that there would need to be about 15 customers in at any one time to fund three staff and cover expenses.

To work this out, they must have carefully studied how long the average person spends in the café, how much they consume and how much it costs them.

Once the averages have been calculated, a suitable pricing strategy could be determined.

How We Work Out Our Pricing Strategy

Their closely monitored pricing strategy is something that we should all take heed of. Profit margins are important in business. Too many businesses fail every year because they haven’t worked out their profit margins properly.

So, look at your pricing strategy. Is it suitable or do you need to readjust it?