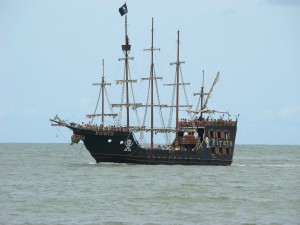 Blackbeard can teach us a lot about marketing

Edward Teach, aka Blackbeard the pirate, is probably one of the best known names from the Golden Age of Piracy. He cruised around the West Indies searching for prey in which to loot their valuables. Since his death at the hands of a pirate hunter, Blackbeard became a symbol of pirating and is often depicted as being a horrible man who had a taste for blood and violence.

However, evidence exists that contradicts this. To be more accurate, there is limited evidence to suggest he ever killed anyone. Instead Blackbeard relied on reputation and the imaginations of his would-be victims into making them surrender. This had a positive impact on his pirating career, he didn’t have to waste resources fighting a ship’s crew and it protected him and his crew from injury or death.

The same methods that Blackbeard implemented during his time as a pirate are still applicable to marketing today. By learning these lessons, we can improve our marketing, reach more of our audience and convince them to take the actions we want them to. So what lessons can we learn from Blackbeard?

1. Blackbeard: The Name Says It All

Edward Teach is not really a scary name when you think about it. Many of Blackbeard’s contemporaries were going around being called by their names (or a variation thereof) while Edward Teach chose Blackbeard.

In colour theory, black represents power and control while also being intimidating, unfriendly and unapproachable. This would mean ships being approached by Blackbeard would know that negotiation was not an option and their only chance for survival was to surrender.

Lesson #1: Use the right name to let your audience know who you are.

Lesson #2: Use colour theory to define who you are on your website and other marketing materials.

2. A Logo To Represent Yourself 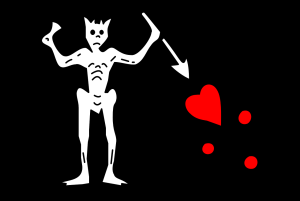 The flag used by Blackbeard to scare

Every pirate used to fly their own flags when it came to sailing across the seven seas and Blackbeard was no different. His flag was rather unique in that it displayed a skeleton toasting the devil while spearing a red heart

By being associated with this image, Blackbeard inspired an image of aggression and violence. The heart was more than likely representative of his prey while the skeleton toasting the devil is certainly a depiction of him. This logo gave no doubt who was coming and what could befall them if they didn’t comply with his requests.

Lesson #3: Create a logo that represents your business, not just one that looks good.

3. A Reputation To Harm

Finally, Blackbeard was renowned for violence, yet there is no evidence he killed anyone. But by having this reputation, many of the ships he came across would simply surrender.

You can achieve the equivalent results by associating your name with success. If you can prove that you can get the job done then prospects won’t argue, they will be eager to convert into customers.

Lesson #4: Build a reputation of success.

4. Wise Use Of Resources

By getting crews to surrender without a fight, Blackbeard didn’t need to use many resources that would have been hard or expensive to buy. It also reduced his costs, especially as pirates were compensated for injuries inflicted in battle, so he was able to claim more of a prize for his ventures.

Likewise, by creating a strong marketing campaign, you can lower your customer acquisition costs and have a better return on your investments. One of the best ways to do this is to implement a blogging and social media campaign. These are both free to implement so utilise few financial resources, and can help build your reputation and brand image. They are also easy for your audience to discover through social media activity or search engines – giving you a wide area of access.

Lesson #5: Use your resources wisely to build a strong reputation.

There are many marketing lessons you can learn from Blackbeard the pirate. By looking at how he created a brand image, you can create a highly converting and successful marketing campaign that will generate leads and revenue for your business.

What is your opinion on Blackbeard the pirate? Good marketer or blood thirsty pirate?